In connection with the expansion of the airport, a second Passenger Transportation System (PTS) will be built, running partially parallel to the existing elevated "Sky-Line" and connecting the existing terminals with the new Terminal 3. The study looked at two new stations: one in the Pier C area and one on the Terminal 1 right-of-way.

Station C serves as a transfer point between the old and new PTS alignments and provides access to the planned Pier C. Since the tracks run at a height of 16 m, the entire station was elevated. Each of the five platforms consists of a box girder on two supports, and has a lightweight steel roof. Due to the necessary static height, the girder can accommodate the technology. The five platform modules are combined into a uniform building by a surrounding outer shell of metal panels. At the front ends, the station opens up to the tracks with glass facades.

Station F forms the terminus of the new PTS track to the north of the airport. The entire station is planned as an elevated structure above the bus station. It is designed as an elliptical tube that opens to the south towards Terminal 1 through a sloped facade. The glazed end faces are set back into the building. The station's load-bearing structure consists of reinforced concrete girder disks, each of which rests on two supports at a center distance of 8 m. Due to their height, they simultaneously accommodate the station's technical areas on a level below the platforms. 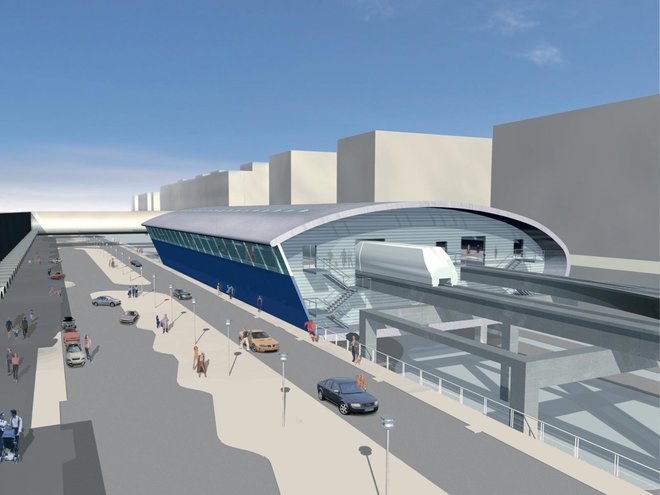