Ciba Vision is one of the leading companies in research, development, production and distribution of contact lenses and contact lens care products.

An expansion was planned for the Großwallstadt site in 2000. Our office emerged as the winner of a competition and was commissioned with the implementation.

In the southeast area of the existing complex, a two-story addition was made to the one-story logistics hall to accommodate new production and office space.

High office qualities were also achieved on the second floor. The extreme depth of the building was divided by inner courtyards, allowing sufficient light to penetrate into the office areas and ensuring optimal utilization of the space.

The structure completes the single-story logistics hall to form a three-story cube with interior courtyards on the second floor. The facade of the logistics hall, made of aluminum panels with a division by window bands, is continued on the upper floors and supplemented by external staircases as additional escape routes.

The construction of the logistics hall made of precast concrete elements was also used for the addition. The columns were designed as two-story structures in order to eliminate the need for additional bracing walls in the office area and to achieve maximum flexibility.

The facade made of prefabricated aluminum panels could be easily connected to the existing facade and can be dismantled at any time for expansion purposes. 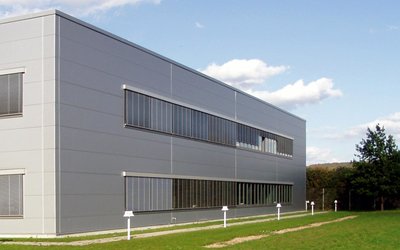 New construction of a laboratory building